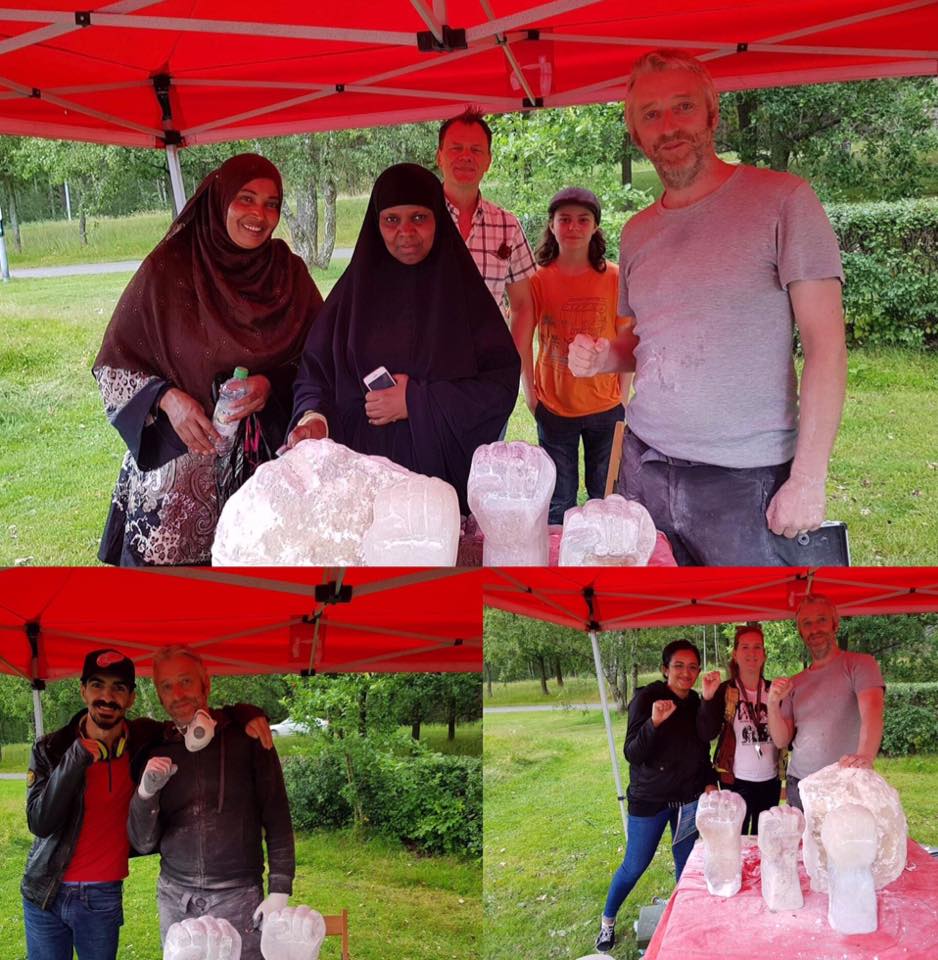 “I have always been an active socialist and a campaigner against fascism so, when I read accounts about the International Brigadistas that drowned from the ship Ciudad De Barcelona on their way to fight fascism in 1937 in the Spanish Civil War, I was moved. It reminded me of the many refugees that have also died in the Mediterranean in recent years.
There are many reports that the Brigadistas sang ‘The Internationale’ as the ship was sinking and this really hits me hard. I was utterly stunned to read that one of those Brigadistas shared my name; another Rob MacDonald. He died that day struggling for the same values of solidarity and internationalism that I stand for in my day.
As a stone sculptor and garden builder, it became obvious to me that I needed to create a monument and park to commemorate this tragedy. So me and my life partner Aurora who is from Cataloni, teamed up with local historians and activists and over some time the Solidarity Park project was born.
The important issue for us is to honour these heroes and the local people who saved many of them. Many of the Brigadistas will remain unknown as the ship travelled clandestinely and the history has been hidden but we want to find out as much as is possible.
What also we wanted was to tell their story in a relevant way so that people today understood what the Brigadistas stood for. From that point of view we plan to make the project as participatory as we can and get young people from where the ship sank (Malgrat de mar, Catalonia) involved into actually doing the sculpture with me. This we are going to do with local schools.
Also, we want to bring the international and local communities together again. That is why we are using ‪Chuffed.org‬ to appeal for the start up money for the project! By launching the crowdfunding with Chuffed, lots of people have got involved and we are spreading this story around the world and as part of the campaign. In the process, we have uncovered new and fascinating history about people we didn’t know who were aboard the ship.
The highlight was finding the family of the other Rob MacDonald. I am now an honouree cousin of theirs, which makes me very proud. Through them we have had a song produced by a known folk singer Eric Faulkner.
We have also held socials, live events and auctions to fundraise. In all, it’s been a wonderful journey although exhausting too!
Finally, we are set to start working on the project, but we will keep the fund going as there is so much more to do and clearly the scope of the project is going to grow!
So we invite you all to pick up a hammer and chisel and start telling the Brigadistas story which, after all, is about and for us all!”

Head to Rob’s crowdfunding campaign page to find out more about this awesome campaign and fascinating part of history: