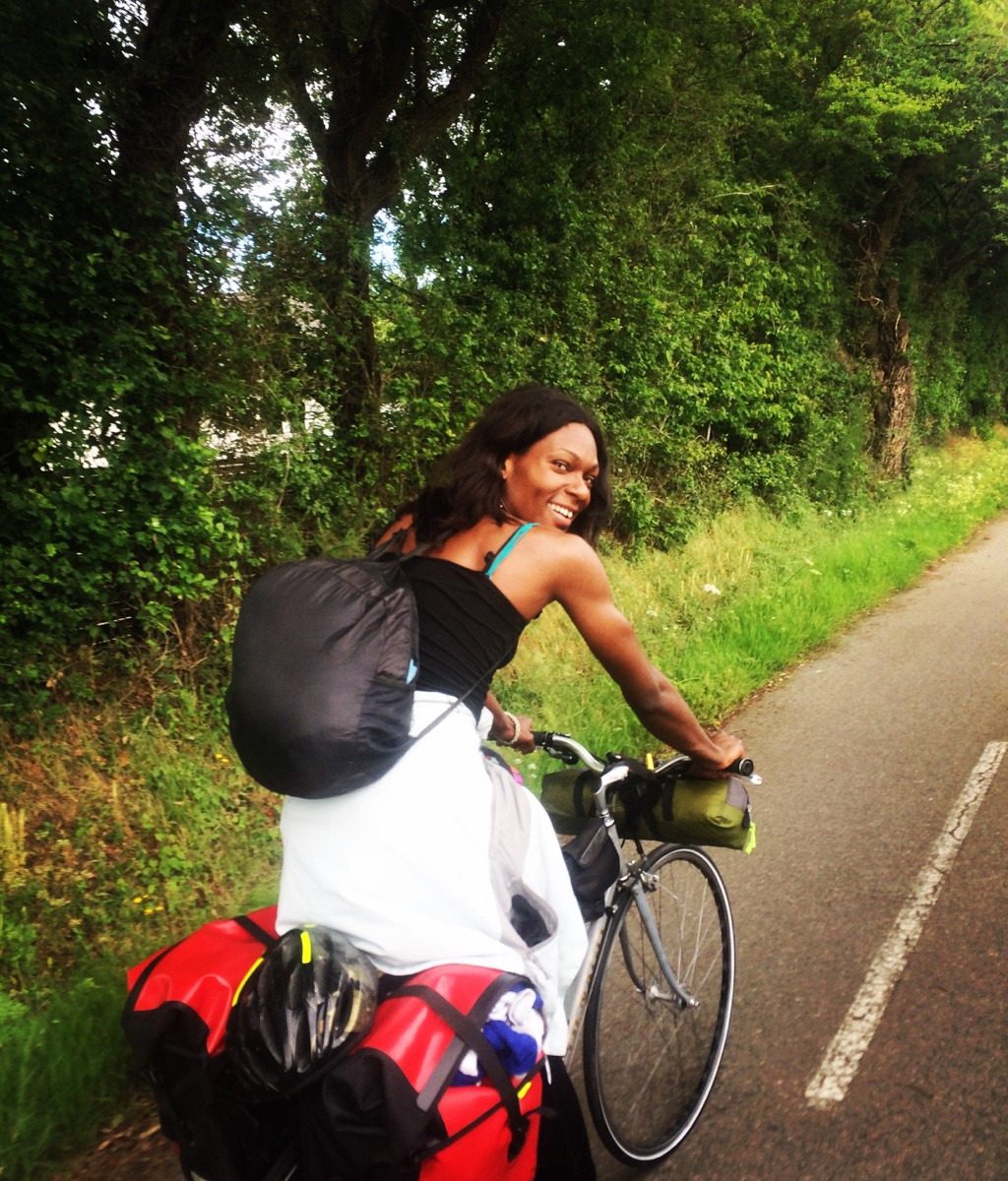 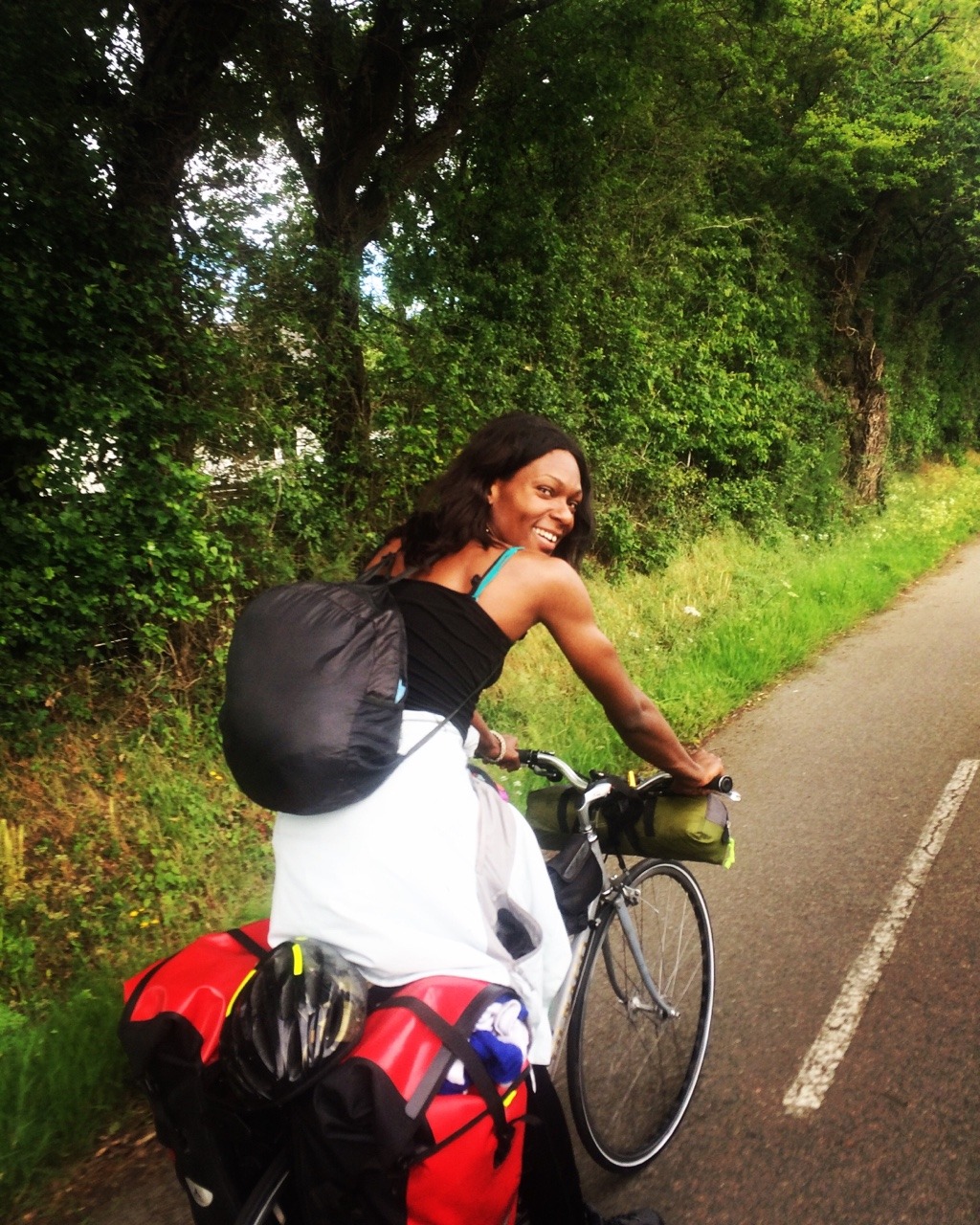 “My name is Olu… and this project is (somewhat secretly) about me. It has been really tough to be at the centre of it – because it entails one of my biggest fears – asking for help. In that way, it has been humbling. A friend of mine knows about a lot of the trauma and instability I had experienced – from care through abandonment by parents, visa renewal issues caused by my parents negligence and homelessness amongst other issues. When it came to time to get my visa renewed, I freaked out. I was scared, penniless, homeless and had no idea how I was going to come up with the full amount and cross over this one big obstacle. I cried and was constantly anxious. He eventually suggested cycling as a fundraiser. I hesitated. I was scared but what was more scary was not being able to have at least one major issue in my life sorted – and this one was pretty serious.

I think my own first hand experience over the years allowed me to understand just how serious it can get and how desperate many people are and will be under my circumstances. The friend who suggested it – originally from the states – has had experiences with visas that were less than pleasant. He also knew what it was like to have no one in your corner – as I have an estranged family who I haven’t seen in over 14years. Himself – alongside the other three who supported the project – have also had experiences with being homeless and destitute and the effect it had – both internally and practically when it came to sorting out matters this big and important.

I am fired up by the possibility of getting my indefinite leave to remain and having the chance – after 17 years at starting life again. I am prompted to push and fight for me life in a way I never have been before. I feel hope like I haven’t felt it before. I am fired up by the possibility of something happening that I hitherto thought was impossible. It is the first time I have experienced suck kindness and I am admittedly deeply taken aback by it. I cannot begin to explain how much that fires me up. I am always stomped when someone contributes – from friends through people I speak to on occasion through to strangers – wholeheartedly and just because they want to. I do not think they know just how much they are holding my life together and changing it. Perhaps it is because of my life experiences, but I have never experienced such kindness. Practically speaking, the idea of committing to something as intense as cycling country to country and seeing it through fires me up too. Prior to this fundraiser, although I knew how to ride a bike, I had never ridden longer than 2 hours talk less of a long distance trip. I did not even own a bike. It was borrowed. I was accountable to myself, for my life, and to everyone who had given – to just keep pushing – that has been one heck of a fire up.

The team was initially brought together after conversation with friend – Khaleb. After speaking at length about my situation, he joined heads with three people he was living with who spoke about using a cycle trip as an opportunity for a fundraiser to help me out of the rut. They then brought the idea to me about 4 – 6 weeks before it actually took off. The group eventually disbanded because Khaleb had to leave for work and to head back to the USA and there were some pace issues that came up but hiccups happen. I am so glad I was able to carry on and also for the incredible support from not just friends but also from strangers – in time, advice, contributions and sometimes even hosting me. I am ever grateful for the fact that the fundraiser itself was set up and is where it is today. I will have to return half way through to start the visa application process because of dates. The three guys will go to Greece but I will continue the rest of the way to Greece once the visa application appointment is met too!

They specifically chose this for me – as explained above – because of my personal circumstances which had been ongoing for years since I came out of care.

This cycle fundraiser has had an incredible impact on me. It has changed my life in so many different ways I cannot begin to describe. I had very little money so I ate skipped food and mostly bread everyday. I slept mostly wild camping and also by myself in my tent, sometimes in the houses of complete strangers. At times, this was incredible and I was overwhelmed with the kindness of humanity – especially being in a foreign land. At other times, it was not so safe. There was a night I was almost raped bya man who had a young daughter whom I thought was being genuinely helpful. I managed to get away at 3am and slept close to a pond in the centre of a small town called Vidauban in France. In the morning, two elderly ladies came separately to give me breakfast. It was just what I needed after a rough night, a long day ahead of cycling and little to no money. Its small miracles like that that occurred periodically I was blown away by. I met a lady I had followed on social media for almost two years – very randomly in a small town I cycled in to find a spot to camp for the night. I looked at her because I recognised her. We got taling. She wound up helping me with money when I was down to my last euro (she had no idea how timely that was). Not only that, her husband gave me a water flask to keep my water cool and pepper spray as he said he had a daughter and was concerned about me being on my own. She also single-handedly advertised the fundraiser to her friends on her social media and got me some donations. This is someone I did not know. I am overwhelmed each time I think about her kindness. I have had the chance to meet people who have offered me a home whenever I need it. For someone without a family and coming from years of homelessness, this has been deeply touching, somewhat unbelievable and incredibly healing for me. There have been nights spent not sleeping (I found out I was allergic to grass on this trip), been approached by weird men asking me for sex because I was on my own cycling, days spent getting incredibly lost, one morning i packed up my tent and saw a snake not too far from where I had set up tent, I have met so many incredible people, I cycled a few days with a man who cycled across Canada (Peter Ledingham – who happens to have an epic story behind him), one of my best cycle days was the ‘three countries in one day’ experience – going across the border from Nice in France through Monaco into Ventimiglia in Italy. I was so scared to make that crossing for some reason and felt incredibly proud when it was done. There are so many stories and pictures to recount. Great times and tough times and weird times. I would be more than happy to share these all with you. Please let me know if you need any further information from me.

I have 10 more days to raise the rest. I know Khaleb has pushed the dates back but I actually need it pushed forward again because I need to make my application for my visa extremely urgently! Deadline will be July 31st / August 1st at the very latest.

I still have £1,100 to go and I admittedly feel a little anxious about it all coming in but I am trusting and hoping. I have sent this link to so many people and hope that with the help of chuffed, the rest can come to realisation. I cannot wait to start building my life again.

Thank you SO MUCH to Chuffed for simply existing as an organisation. There is so much I could say. This has impacted me in the deepest of ways and I will feel it and talk about it forever. If there is ever anything I can do with regards to chuffed itself as an organisation, I would LOVE to so please do let me know.”

Learn more about this awesome campaign below: